The future of Tatras: mountainous nature or faceless suburbs? 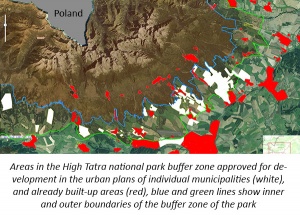 Or how Tatra mountain Biosphere Reserve is overwhelmed by uncontrolled suburban sprawl.

About one third of the buffer zone area of the Tatra National Park in Slovakia is already designated in valid urban plans for new construction of apartment estates and recreation facilities and its ecological purpose will come to an end. In other words, about one third of the most important ecosystem functions and services in this zone could be lost. The connectivity of habitats will be broken and migration corridors of large mammals interrupted, increasing the possibilities of unwelcome encounters between large animals and humans to the extreme. The gradual reduction and fragmentation of the buffer zone mean its function is shifted to the core area of the park itself, decreasing the extent of the national park factually. The beautiful open landscape at the foothills of the Tatras will be lost for ever. Such a future is envisioned by some developers and investors. 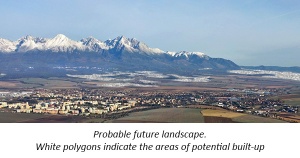 In the park itself, over the last two decades the quality of the natural environment has been also degraded, the healing function of mountain forests has drastically diminished, green areas are also disappearing at an unprecedented rate giving space to new tourist infrastructure and private residence complexes. 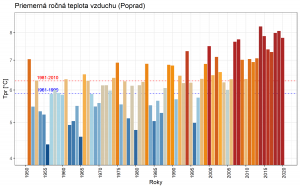 The ongoing degradation of the park and the prospects of the loss of natural areas due to development run counter to the growing global concern for the conservation of nature in the face of climate change. The average annual temperature in the region has risen over 3 °C during the last 40 years in contrast to average global temperature change of 1.5 °C (based on official measurements of Slovak Hydro-meteorological Institute). The planned development will lead to a significant loss of ecosystem services that are critical in the face of climate change: climate and water regulation, carbon sequestration, prevention of soil erosion, nature-based recreation and others. Additional pressures on ecosystems and biodiversity could be critical to their survival in challenging climate change conditions. What are the reasons for such terrible prospects?

How could a national park face such a massive disturbance to its territory and biodiversity?

Tatra Mountains are the smallest high mountains of the world and a symbol of national identity of Slovakia. The Slovak part was declared a national park after the devastating World War II in hope that this will help to preserve one of the keystone ecosystems of the Carpathians. In 1993 for the then well-managed transboundary national park, UNESCO has approved for Tatras designation of a biosphere reserve under the Man and Biosphere Programme as a tool for reconciling the conservation of biodiversity with sustainable use of natural resources in the Tatra region. Most of the area of Tatra National Park is also covered by the site of European importance (Natura 2000). 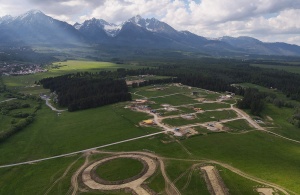 park. After the seventy years of park’s existence, we can observe gradually disappearing its natural landscapes  and wildlife and decreasing ecosystem services with ominous effects. The origin of the current dire state of affairs can be traced back to a decision made by politicians in 2007. Then, under the disguise of modernizing management and improving effectivity in almost all national and landscape parks in Slovakia, successful and recognized directors who tried to resist pressure from private developers and investors were without any reason and further hesitation demoted and replaced by puppet managers. Since then in the Tatras, a former speculative wood trader  took over the administration of the national park. 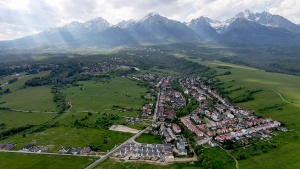 Already when directors were changed forcibly in 2007, there were voices that this was a result of lobby groups and political interests. Significant degradation of the natural environment of the national park and its buffer zone with unbridled development of private recreation facilities like apartments, weekend cottages, sport grounds, etc. was predicted. In 2012, there was an open letter sent to the minister of the environment signed by 78 leading Slovak scientists and conservationists pointing out the destructive mismanagement of Tatra National Park, avoidance of legal procedures like environmental impact assessments (EIA) and lack of transparency and public involvement in decision-making processes. All the claims in the open letter remain valid until now. But all the efforts for open discussion were silenced by the previous political establishment and behind the scenes threats were made towards individuals who wanted to raise alarms. 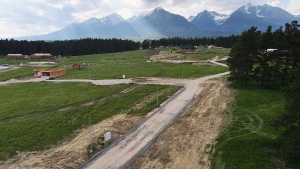 Now we are in the year 2021 with a new government wishing to address the issues (reform of national parks is proclaimed in its political agenda), but the competent authorities remain inactive to respond to the challenges and local problems known for a long time. So far, there is no zonation of the national park, the park has no proper and comprehensive management plan, traffic and parking are badly regulated and an agreement on acceptable visitors‘ regulations is also a problem. State officials who skipped EIA and created the situation are still in position to make further decisions. Tatra National Park administration is silent and did not use its right to request EIA even in cases of large-scale development projects in the buffer zone of the national park.  Not a single person wishes to take responsibility. The vision to obtain the status of IUCN category II for Tatras has been significantly dented. 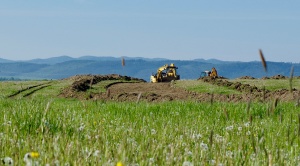 At the same time, public scandals appear on a regular basis as various decisions and planning permissions made in the past become reality and cause anger. Residents and the general public are shocked when they wake up on the noise of bulldozers digging in places which all thought were protected by law as a national park. The recent outrage, for instance, unfolds as journalists disclosed a proposal to build 3 apartment blocks with 100 units in Tatranska Lesna inside the park on a plot where forests have successfully recovered after the windthrow in 2004 which affected 12,000 ha of forests. The surprising discovery for uninitiated is that this development was in fact approved already in 2008, i.e. it had to have a blessing from Tatra National Park administration back then as it was included in the valid urban plan. For illustration, in a nearby village Velka Lomnica there are many apartment blocks, most of which are empty for the most of the year and the place resembles a ghost town. For whom are all the facilities build?

Nowadays, we witness that the Tatra region with its prime natural heritage is gradually becoming the largest construction site  in the country while the carrying capacity of ecosystems is surpassed and negative effects start to be clearly visible. To understand the driving forces behind this unparalleled building bonanza, one has to recognize two hidden aspects of the story. The first is what some describe as property alchemy. i.e. cover-up of deceptive changes of land ownership in the region where either a lot of prime state-owned land was secretly privatized (e.g. 430 hectares of state property in Strbske Pleso were transferred to private owners thanks to collusive action of public officials, this case was brought to court) or many lucrative land plots were cleverly misappropriated from simple people or communities to the hands of oligarchs and land speculators who are often close to political leaders. The land ownership is steeped in an intricate web of involved actors and some of it is even illegal, hence not by coincidence some describe this web as property mafia. 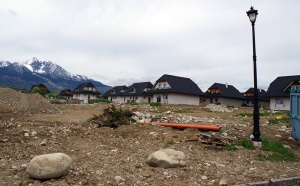 The second driver is a lot of cheap money in circulation among certain people and a great interest to invest it. To buy property in the Tatra region is advertised heavily as a good investment with guaranteed returns. Therefore, new land owners are eager to include all their new property to urban plans for development and the business model goes on. When these aspects are taken into account, there is no surprise that in our example of the proposal for 100 apartment flats in Tatranska Lesna which was made public in the recent national TV report, the previous person who sold the plot to the current developer with rights for building the apartments is well backed by political elite (here it is Daniel Guspan – since 2013 the head of Slovak parliament secretariat/chancellery).

and Tatra National Park administration never asked for one is alarming. In the last months, the public as well as concerned stakeholders have expressed their dissatisfaction by an array of initiatives. Among the most visible are a public petition organized by 25 NGOs called Let us make national parks free to support a real reform how national parks are managed. In July 2021 a open letter signed by a long list of representatives of local municipal authorities, science, tourism and cultural sectors from the Tatra region was sent to the minister of the environment. The letter requires the government to act and to rectify the situation and to integrate local people 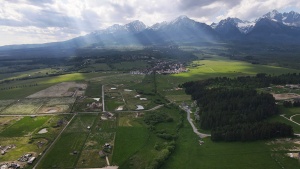 into defining and implementing solutions for the Tatra National Park and its surrounding area. So far, state institutions including the Tatra National Park administration have no dialogue with local stakeholders, in contrary there is a  growing dissatisfaction and mistrust among various local stakeholders towards the competent officials who gave their seal of approval to all the urban sprawl. Basically, Tatra National Park administration lost its credibility in the region. One of the pillars of UNESCO MAB Biosphere Reserve status – an open dialogue with local communities is absent. 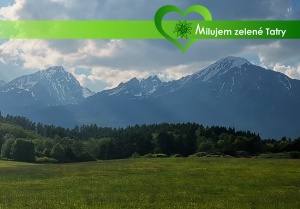 Many local residents feel defenseless or many are still unaware of what was already decided on paper. However, when the extent of planned suburbanization was disclosed and all the proposed developments are slowly becoming reality, many people become roused to take action. A local initiative called I love green Tatras (Milujem zelené Tatry) was created spontaneously by concerned citizens and organizations which call all to unite forces for preserving Tatras as a wildlife refuge and a place for all citizens and to demand key Slovak decision-makers to take responsibility for the future of the Slovak national pride – the highest mountains of the Carpathians and to enforce international and national obligations to protect them and their fragile ecosystems for humankind, not only for those with money and power.

The foothills of the High Tatras are being transformed and losing the character of exceptionality. Beautifully blossoming meadows, where for conservation reasons even grazing of cattle is restricted, suddenly turn into building plots. The smallest high mountains in the world will (thanks to the market forces) be surrounded by the sea of apartment houses and holiday homes designed for profit without a relationship to the landscape, without respect or understanding of its spiritual values we inherited. 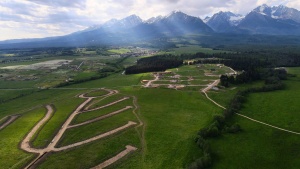 The biggest problem today is the lost relationship with the countryside, our low respect for homeland and for nature. As we deal with landscape today, so it will feed back to us in the future. Many of us feel helpless. What can we do about it when it is already approved in the urban plan? Cases where a corrupt official with a round stamp can decide without penalty to the detriment of the public interest, the country, or the protection of the environment are multiplying within our society as cancer metastases. But how to defend ourselves against this cancer-like process that affects our country?

Presentation “Tatras at the crossroads” (Conference „Protected Areas – Cornerstones of Ecological Connectivity in the Carpathians and Beyond“, 28-30 September 2021, Visegrád, Hungary). 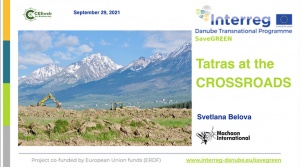